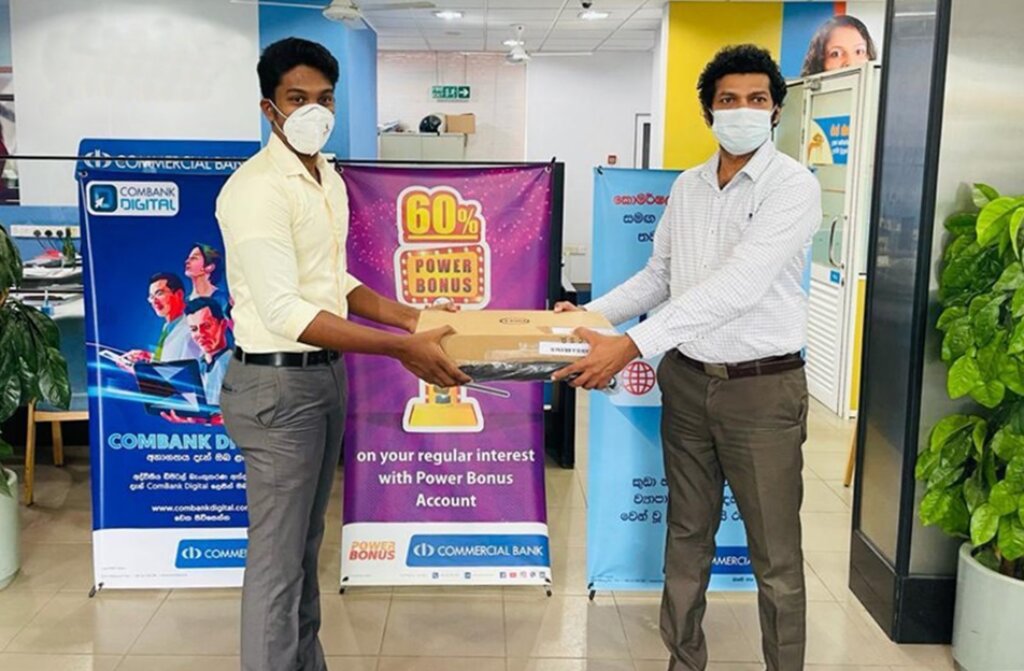 Six teams of students from local schools and universities have been recognised for demonstrating their coding skills by developing innovative and useful applications, and have won a fully-equipped IT Lab, laptops, electronic devices, microcontroller kits, and other equipment from the Commercial Bank of Ceylon.

The talent search was launched in the form of ‘Hack:bit 2020,’ a virtual hackathon organised by the  STEMUp Educational Foundation whose mission is to inspire and engage with students to interest them to pursue scientific, technological, engineering, and mathematical (STEM) degrees and careers. The CSR Trust of the Commercial Bank of Ceylon was a sponsor of the event and extended its support to this exemplary tech competition to pave the way to build a collaborative platform for young Sri Lankans who are interested in innovation through technology.

Commenting on the sponsorship, Commercial Bank Managing Director Mr S. Renganathan said: “The CSR Trust of the Bank already invests 70% of its funds to promote education in Sri Lanka. In Hack:bit 2020, we saw another opportunity to be a part of encouraging young minds to pursue their passion for technology and create practical solutions to existing problems. While we congratulate the winning teams, we believe that each participant was ultimately a winner as he or she was exposed to a wealth of tech knowledge that will be useful in innovating for the future. Participating in this hackathon could also be a gold star on a résumé, especially for those with limited experience in the tech field.”

The national level hackathon for school students and university undergraduates, Hack:bit 2020 invited participants to use programming tools and languages of their choice to develop innovative products of relevance to the real world. After receiving over 200 applications, a panel of judges assessed the initial participants based on criteria including uniqueness of the idea, innovativeness, implementation, business value, and sustainability of the developed product. The panel of judges comprised local technology and academic professionals with years of domain expertise between them.

Subsequently, 10 school teams and 10 university teams were shortlisted to participate in the semi-finals. At this stage, participants were provided with training, technical and non-technical knowledge sharing, and mentoring sessions headed by industry leaders. Lastly, five teams from each category were invited to submit their case online on the day of the final presentation. Participants were also presented the rare opportunity to confer with experts in the industry and convert their ideas into reality.

Commercial Bank funded the organising of the competition and the exciting prizes that were presented to the first three winning teams of both the school and university categories. Team ‘Tech Army’ from Central College, Kuliyapitiya, Team ‘Crop Protector’ from President’s College, Embilipitiya, and Team ‘Nixo’ from Ananda College, Colombo, were the first, second, and third prize winners in the Schools category.

Team ‘Tech Army’ won an IT Lab with 10 computers and furniture for its school and Arduino starter packs to encourage the coding and building of electronic systems, and external hard drives for each team member. The second placed winners also received Arduino starter packs as well as portable Wi-Fi routers while the third placed winners won BBC Micro:bit starter kits and computer mice.

The Commercial Bank of Ceylon is also supporting a project to equip 100 schools island-wide with Smart Classrooms that deliver digitised educational content, a commitment it embarked on in its centenary year to transform orthodox educational institutions to STEM Centres.

The Bank’s education-related Corporate Social Responsibility initiatives also includes the government – private sector ‘Smart Schools’ project currently encompassing 65 schools in the Western Province. The Bank also funds a 150-hour IT hardware course conducted in collaboration with SLT Campus (Pvt) Ltd. and CISCO Networking Academy in selected schools and has partnered with the Academy to offer an ‘IT Essentials’ course for teachers and students free of charge. Additionally, the Bank has supported the ‘IT Essentials-Instructor’ certificate course for teachers at the CISCO Networking Centre at the University of Moratuwa under this programme.

The STEMUp Foundation is a non-governmental organisation that believes STEM literacy is a foundational skill that matters for all careers. It consists of young volunteers from professional organisations and universities, and seeks to increase computer programming capabilities and empower every child in Sri Lanka.

Sri Lanka’s first wholly carbon neutral bank, the first Sri Lankan bank to be listed among the Top 1000 Banks of the World and the only Sri Lankan bank to be so listed for 10 years consecutively, Commercial Bank operates a network of 268 branches and 932 automated machines in Sri Lanka. The Bank’s overseas operations encompass Bangladesh, where the Bank operates 19 outlets; Myanmar, where it has a Microfinance company in Nay Pyi Taw; and the Maldives, where the Bank has a fully-fledged Tier I Bank with a majority stake.