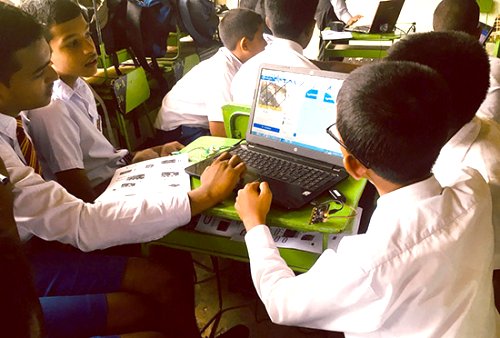 The Coding Clubs project was embarked upon last July by the STEMup Educational Foundation in partnership with the Commercial Bank and IRIM Croatian Makers, Micro:bit Educational Foundation, and Rotary Club Zagreb Centre to name a few. The STEMup Foundation’s mission is to inspire students to pursue Scientific, Technological, Engineering, and Mathematical (STEM) degrees and careers.

The ‘100 Schools, 100 Sessions’ project’s primary objective is to teach computer programming to school children and to encourage them to demonstrate their skills by developing innovative and useful applications. It involves assigning trainers to selected rural government schools, training of trainers and volunteers, handing over of ‘Internet of Things’ (IoT) kits and other resources to trainers and schools, team creation in schools for ideation to develop real-world applications through coding, and the conducting of hackathons.

The IoT kit included a BBC micro:bit – a pocket-sized codeable computer with motion detection, a built-in compass and Bluetooth technology, which allows students to express themselves digitally. It also connects to other devices, sensors, kits and objects, and is a companion to Arduino, Galileo, Kano, littleBits and Raspberry Pi, acting as a springboard to more complex learning.

The STEMUp Foundation is a non-governmental organization consisting of young volunteers from professional organizations and universities with a mission to increase computer programming capabilities and empower every child in Sri Lanka.

Under its education-related Corporate Social Responsibility initiatives, which place emphasis on IT literacy, the Commercial Bank of Ceylon has donated 187 IT Labs to schools and other institutions and is a partner in the government – private sector ‘Smart Schools’ project currently encompassing 65 schools in the Western Province. The Bank has made substantial investments to develop the curriculum for all age groups for this program and has also developed an online learning portal called Sipnena to benefit students.